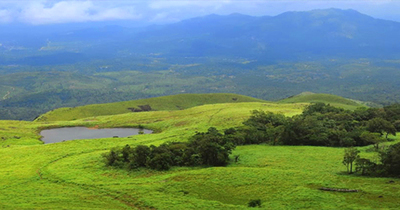 Trekking to the Chembra peak is one of the risky tourist endeavours. Chembra peak is the highest peak in Wayanad at 2100m. above mean sea level. It is14 kms. west of Kalpetta. Trekking to the top of this peak takes almost a day. Tourists can also stay one or two days at the top of the peak in temporary camps. District Tourism Promotion Council provides guides, sleeping bags, canvass huts trekking implements on hire charges to the tourists. The scenic beauty of Wayanad which is visible from the top of Chembra is very challenging and thrilling. The blue eyed water in the lake at the top of the hill never dries up even in the peak of summer. All along the steep and slippery way to the top of the hill, the whispering of the flowing spring which sprouts from the top of the hill accompanies the tourist. If he is fortunate enough, on his way he may come across a passing wild beast, may be a leopard who may instantly hide behind the bushes. Camping in the night with camp fire and sleeping bags at the top of the peak in shivering cold is everlasting experience.

Pakshipathalam in Bramha Giri hills at Thirunelly is a challenging tourist spot. It is 7 kms. north-east of Thirunelly temple and is situated 1740m. above mean sea level. To reach 'Pakshipathalam', 17 kms. have to be covered through wild forest. The deep rock caves formed among the thick blocks of rocks at the northern top end of the Brahmagiri is the abode of various birds and wild beasts. To go to 'Pakshipathalam' special permission has to be obtained from forest department. DTPC (District Tourism Promotion Council) arranges vehicle, guides, camping apparatus etc. to the tourists on hire charges. 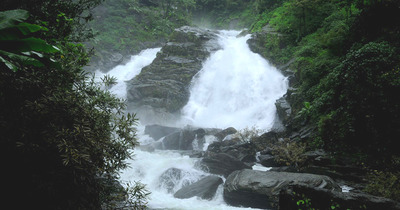 12 kms. east of Meppadi. Water falls to a depth of more than 500m. in 3 steps.
Trekking equipments are available at Tourist Information Centre, Kalpetta.

Rivers: Kabani river, one of the three east flowing rivers of Kerala, is an important tributary of the river Cauvery. Kabani and its tributaries constitute a powerful river system in the land scape of Wayanad. Panamaram rivulet takes its origin from the perennial lake called, 'Pookode lake'. It flows swiftly through mountain gorges and joined by other streams, tumbles down into Panamaram valley. Six kilometres further from Panamaram, this river joins with the Mananthavady rivulet, originating from the lower regions of the peak 'Thondarmudi'. From this confluence onwards, the river is known as Kabani, a mighty, perennial river which after entering Karnadaka State, joins with the river Cauvery. Almost entire Wayanad is drained by the Kabani river and its tributaries, namely, Panamaram river, Mananthavady river and Thirunelli river.