Wayanad, the panoramic hill of malabar in the northern Kerala, situated above the sea level ranges between 700 meters to 2100 meters, is a homeland of various tribal communities.They can be prominently classified into Paniyas, Adiyas, Kattunayakans, Kurichiyans,Kurumas,Ooralis, Uraali Kurumas etc. 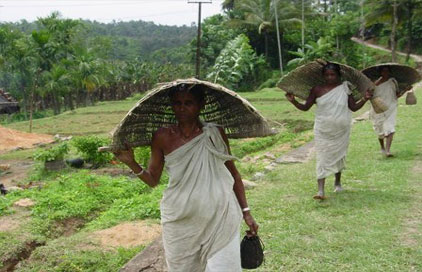 A vast majority of tribes in Kerala state hail from the Paniya tribal sect. Paniyas inhabit in the regions of Wayanad and the neighboring parts of Kannur and Malappuram.

Paniyas, tribes, Wayanad, Kerala, IndiaAs bond labourers, the Paniyas were once sold along with plantations by the landlords. They were also employed as professional coffee thieves by higher castes. The name 'Paniyaan' means 'worker' as they were supposed to have been the workers of non - tribes.

Monogamy appears to be the general rule among the Paniyas. In marriage bride price is practiced like many other tribal communities. Widow remarriage is allowed. They do not practice pre-puberty marriage.They have only a crude idea of religion. Their major deity, is called 'Kali'. They also worship Banyan tree. They hesitate to cut such trees and if anyone attempts to cut such trees, they fall sick.

Due to the various tribal welfare programmes by the government, a change has set in the lives of Paniyas. Adiyas, tribes, Wayanad, Kerala, IndiaThe Adiyas are known as 'Ravulayar' traditionally. The Adiya, like the Paniya, is one of theslave sects in Kerala. In the nuclear Adiya tribal family the husband is the head of the house. Bride price is given to the parents of the bride by the groom. Divorce, widow marriage etc., are permitted. Polygamy is also practiced.

No punitive measure (like ostracizing of the sex offender, as one can see among Kurichias) is prevalent among the Adiyas for sex offences. Even if their woman commits such offences they are allowed to undergo purificatory ceremony known as 'Kalachu Veypu' to join their community back.

As their name denote, the Kattunayakan were the kings of the jungle regions engaged in the collection and gathering of forest produces. They are known as Ten Kurumar since they collect honey from the forest. They have all the physical features of a hilltribe. Their language is a mixture of all Dravidian languages.

They worship animals, birds, trees, rock hillocks and snakes. They are firm believers in black magic and sorcery. They also worship their ancestors, along with worshipping Hindu deities. The Kurichiyans are an agricultural tribal community. Up to some decades ago untouchability had been fairly and widely practiced by these tribals.

They have clean food habits and keep their houses, premises and dress always clean. They are matrilineal and live in joint families, under the control of their chieftain called 'Pittan'. The members of the extended family work together and put their earnings in the same purse. The Kurichiyans prefer cross-cousin marriage to any other marriage alliances. They do not practice polyandry.

Their social control mechanism was most efficient, offenders being excommunicated. Many of the excommunicated Kurichians are now educationally and economically better compared to the traditional Kurichians.

Uralikuruma, the most versatile and colourful tribal people, is one of the rarest artisan tribes in Kerala. They are mostly found in the Wayan region. Uralikuruma is one of the three subdivisions of 'Kurumba' and the two others being 'Mulla' & ' Jen Kuruma' tribals. 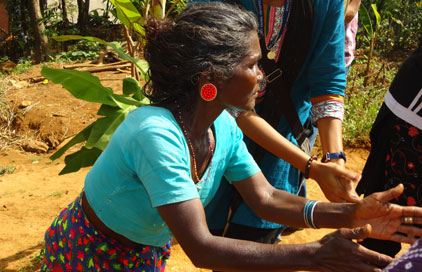 Uraali Kurumas, tribes, Wayanad, Kerala, IndiaUralikurumas herald themselves as the followers of ancient 'Kurumba' or 'Pallava' which were once so powerful through southern India. Uralikurumas are also called Bet Kurumas. While Bet Kurumas, found now in the Mysore district of Karnataka speak Kannada, these tribals in Wayanad speak a mixture of Kanada and Malayalam languages. Amongst the Kuruma tribals in Wayanad The Mulla Kurumas consider themselves superior to the other Kuruma sects.

The Uralikurumas choose their life partners from their tribe itself. When a person dies they believe that the soul of the good become gods and that of the bad become devils. They worship deities as 'Bettu Chikkamma' and 'Bamadu' and also demons and ancestral spirits.

They play the flute and drum during their festival occasions festivals. The "Uch-alkali" is played in the month of February. Some men dance while some beat the drums and read the flute. An old man in the group performs rites to their deity 'Bettu Chikkamma'. Woman are not allowed to participate in theses ceremonies.They are also skilled potters with their women folk chiefly involved in this task. Baskets and mats of various types with reeds and bamboo and hand made pots are manufactured by them. But it has been seen that the younger generation now prefer working for non tribal landlords in plantation and paddy fields for an earning without much discomfort.